Could this be the finest tonearm you’ve never heard of? Timestep’s Dave Cawley firmly believes so, which is why he has just signed an exclusive distribution agreement to import Glanz tonearms from their native Japan to the UK. What can we anticipate from these ‘masters of precision’?

A rebirth (of sorts)

The brand name ‘Glanz’ is not new. It originated back in the 1950s with Japanese company Mitachi Acoustics whose analogue audio products were developed and marketed under the Glanz brand. Several of the company’s products were created by Masataka Hamada, an accomplished audio engineer who, several decades later, poured his skills into developing his own range of high-end tonearms. Keen to honour the brand that nurtured his early audio career, Hamada acquired a special licence from the Mitachi family to market his tonearms under the Glanz name. And so, in 2008, Glanz was reborn.

Glanz tonearms are manufactured by Hamada Electric in Shizuoka, Japan. The range offers three levels: the original very high-end S Series, a subsequent more affordable B Series, and the flagship ‘jewel in the crown’ SD model. All are crafted by Hamada himself.

So what sets a Glanz tonearm apart? Let’s start with the original S Series, since that’s where Glanz began. The first thing you notice is the design, which follows the classic aesthetic tradition of the famous S-shaped arms prevalent in the 1970s. Bottom line, these arms are something of a work of art in terms of both visual beauty and workmanship. But don’t be fooled by their stunningly sleek vintage-style bodywork. The Glanz is a very technically advanced tonearm indeed, which becomes immediately apparent the minute you start to dig into Hamada’s design philosophy.

A whole new level of precision

Who would be a tonearm engineer? Every morning you arrive at work to be greeted by an impossible challenge. The very thing you want to achieve is inextricably linked to the very thing you need to avoid. Blame Newton’s third law of motion: for every action, there is an equal and opposite reaction. In this case the motion in question is the movement of the cartridge’s stylus and cantilever, which needs to be as fluid as possible in order to faithfully convey all of the complex information held in a record’s groove. In the ‘action’ part of the equation, this movement generates the desired audio signal which then heads off on its journey through the amplification chain. But in the ‘reaction’ part it also generates mechanical vibration in the cartridge’s body which, if not swiftly directed away from the cartridge, can result in a distorted and coloured audio signal heading off for amplification.

A potentially excellent way to redirect that unwanted vibration is to maximise the tonearm’s mechanical integrity and to minimise joints between parts, since any such boundaries will serve as obstacles and bounce the vibration back along the arm to the cartridge (the path of least resistance). But hang on, what about the need for unimpeded fluid movement? Are we looking at another impossible challenge?

Well, yes and no. With the Glanz tonearm, Masataka Hamada has relentlessly pursued an ideal of mechanical integrity and fluid movement, combining exacting materials with a whole new level of precision engineering. All key body parts of a Glanz tonearm are constructed from a very high grade, extra hard stainless steel. Any metal with this degree of rigidity takes immense expertise to machine, but when you consider the level of precision found in a Glanz tonearm, then the degree of mastery involved becomes rather clearer. To attain the desired degree of mechanical integrity, the tonearm’s key parts are joined using an interference fit (also known as a press fit or friction fit), in which the joint is achieved by friction after the parts are pushed together rather than by fixings or adhesives. Anything less than a perfect fit would make this impossible. It is, however, a goal worth chasing, since it avoids undesirable material boundaries. Energy transference is thus maximised and vibrational energy can move away from the cartridge body, through the headshell, via the arm tube, through the bearing housing, bearings, arm pillar and base and down through the arm board.

Each of these parts is therefore skilfully engineered to facilitate that. There is no ‘weakest link’. The headshell, for example, is seamlessly machined from a single billet of stainless steel. The curvature of the S-shaped arm is precisely gauged. The meticulously assembled arm pivot features four large bearings, each machined to extreme tolerances to provide optimal ‘tight/loose’ contact and each is hand-inserted using a jeweller’s hammer. The lower bearing in the vertical axis uses a high-precision thrust bearing, giving a structure that allows the high-mass arm to move with exceptional sensitivity.

But wait… we’re still not quite done with those seemingly impossible challenges. In resolving the issue of mechanical integrity and enabling unwanted resonance to be directed away from the cartridge, it then becomes essential to ensure effective damping along that resonance’s pathway. But doesn’t damping risk slowing and dulling the sound? Traditionally, yes. But not in a Glanz tonearm, which cleverly uses ‘parallel damping’ to achieve the desired result without sacrificing musical dynamics or fine detail. Among Hamada’s deftly conceived solutions are a thin rubber insert inlaid into the headshell, various strategically-positioned damping structures within the arm tube, and a counterweight assembly incorporating a triple damping system in which layers of carbon fibre, ABS resin and rubber are held in tension by a central screw, eliminating the natural tendency for materials to relax and become less effective over time.

If that’s the level of detail in the original Glanz S Series, then what might one expect from the flagship SD model?

The SD tonearm takes the S Series’ 12” model and adds a number of cost-no-object processes and features to achieve the ultimate performance. Selected highlights include a diamond-hard carbon layer coating on all metal parts; pure silver signal leads wrapped in silk and encased in poly-fibre for the ultimate anti-vibration transmission; a fourth level of counterweight damping featuring heavy tungsten elements embedded within the stainless steel; and carbon fibre rather than rubber damping in the headshell.

And for those who covet the Glanz’s performance but seek a more affordable entry point? Enter the B Series, in which all of the most important aspects of the S series are maintained but a lower cost is achieved thanks to a simpler three-part damping system in the counterweight, while the anti-skating mechanism and cueing lever are manufactured from ABS plastic, providing a cost-effective yet still resonance-avoiding solution.

“As an engineer myself”, says Timestep’s Dave Cawley, who has just begun importing Glanz into the UK, “I consider the Glanz tonearm to be a masterclass in precision. Its level of detail in design and craftsmanship is something I could happily wax lyrical about for quite some time. But rather than listening to me I suggest you listen to these arms. Speed, agility, clarity, openness and detail are all superlative. The soundstage is focused yet spacious and the overall air is utterly natural. These are quite honestly the best tonearms I’ve heard.” 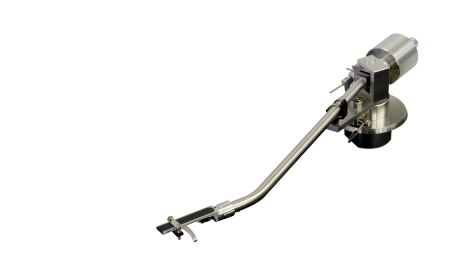