Previewed at September’s National Audio Show and lovingly created to fulfil a personal ambition, these gargantuan amps will be sold in limited numbers as a very special edition.

“If I’m completely honest,” says Shaw, “for much of the past year I’ve been building my own birthday present – and this is it!”.

After discovering a quantity of ‘new old stock’ Russian GU81 transmitter valves, Shaw began to work on a prototype amplifier that would achieve a long-held goal: to effectively drive any modern low-efficiency high-end speaker to realistic levels.

At 260 mm tall, 100 mm in diameter and weighing in at 1 kg, the GU81 is a truly majestic valve. Although the GU81 remains in production, Shaw still favoured the ‘new old stock’ valves for the MB81, hand-picked for their combination of fine resolution, enthralling musicality and immense power.

Always keen to break new ground, Icon Audio believe the MB81 to be the world’s first ever push-pull GU81 amplifier…. 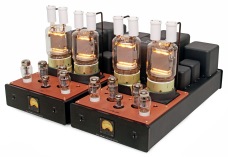