Japanese cable and accessories experts Furutech continue their assault on the various unwanted ‘intruders’ that can get in the way of peak hi-fi performance. The new destat III effortlessly eliminates dust and static from analogue and digital media, from audio and video components and, well, from pretty much anything….

The destat III, already an award-winner in its native Japan, is the third generation model of Furutech’s original destat. Effortless to use, it removes dust and static charge from any and all audio and video media in just one 15-second treatment.

As any fan of high-performance audio knows, static charge builds up on analogue and digital discs. Whether vinyl, CD or DVD, this charge constitutes unwanted electrical interference as well as attracting dust, both of which can lead to distracting noise and compromised sonic performance.

Thankfully, the problem couldn’t be easier to solve. Simply hold Furutech’s destat III over your chosen media and press one button. In just 15 seconds, the powerful fan removes dust while a balanced ion flow generator releases a just-right balance of positive and negative ions to eliminate static.

The new destat III delivers about 30% more zapping power that its predecessor, the destat II. It has also been restyled with a more ergonomic design and, as an added convenience, now runs on easy-to-replace AA batteries. A safety circuit prevents any small electric shocks from the balanced ion flow generator.

So why stop at just your media? Almost every component in a hi-fi or AV system will benefit from eliminating its static charge (best to switch them off during treatment). You can also use the destat III on power cords, speaker cables, interconnects and any and all accessories that include metal components such as record clamps.

Let the destat III take care of static-induced noise in your media and system, then sit back and enjoy the sound of silence. 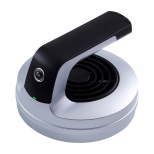 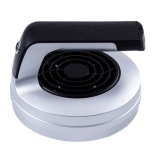