Launched in 2017, British brand Exposure’s XM series of amplifiers is cleverly designed to pack a raft of high-performance features into a compact half-width design. Hi-Fi World’s Martin Pipe puts the XM5 integrated amp to the test – and awards it the full five stars.

The XM5 came to market in January 2017 and was the first product in Exposure’s new XM series. It’s fair to say that it housed one or two surprises, not least the fact that it included both a DAC and a phonostage within its astonishingly compact half-width size.

The series was very much inspired by the resurgence of vinyl in a digital age. Always a brand keen to offer ‘real world hi-fi at real world prices’, Exposure spotted a genuine market need.

“Back when vinyl records were the standard, all integrated amps and most preamplifiers had an on-board phonostage, since the majority of people were using a turntable,” explains Tony Brady, Exposure’s chief designer. “But with the arrival of CDs in the 1990s, phonostages were largely dropped from amplifier design due to their high cost. As a result, vinyl-lovers now have to invest in, and make room for, a whole lot of kit”. Realistically, however, many people simply don’t have the budget or space for a massive bank of hi-fi separates. Which is why Exposure set out to put the ‘integrated’ back into the integrated amp with the XM5 – while halving its size and keeping the price affordable.

At the same time, quality and performance remained as important as ever, and so while most smaller hi-fi components (and a fair few large ones) fall back on switch-mode power supplies – which are far from audiophile grade and pollute the mains supply with noise – the XM5 features a linear power supply with a large 200VA custom-made toroidal power transformer. Only high quality resistors and capacitors are used in the signal path, while Toshiba bipolar output transistors are carefully chosen for their superior dynamic performance.

“I thoroughly enjoyed my time with the XM5,” writes Hi-Fi World reviewer Martin Pipe. “It’s capable of a remarkably musically engaging performance – and a flexible one too.” “Imaging is superb… Presentation is full-bodied yet natural.”

Playing the atmospheric title track of London Grammar’s If You Wait?   Pipe reports, “Hannah Reid’s emotionally-charged singing voice is here sublime, listening being rewarded with a genuine sense of intimacy… Reproduction of the baseline in Hey Now from the same album is simply superb – the XM5 goes satisfyingly deep without losing control.” 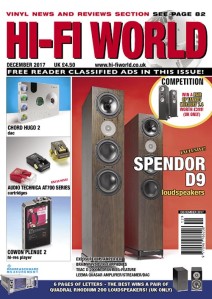 The verdict? “The XM5 punches way about its weight (and pricetag) with a performance that will do justice to decent sources, new and old alike.”

Discover more about Exposure’s XM series and find your nearest dealer at www.exposurehifi.com

Read Martin Pipe’s review in full in the December 2017 issue of Hi-Fi World.