A year ago, Danish audio brand Gamut joined Raidho and Scansonic as part of the Dantax group of companies. Now, the high-performance product ranges of all three brands are benefitting from the resulting influx of collaborative design and engineering expertise.

Scansonic HD’s MB series of loudspeakers was originally created by Michael Børresen, the initial designer of the renowned Raidho range. They offered much of the coveted Raidho DNA and pedigree but at a fraction of the cost, delivering a superb marriage of performance and affordability.

In 2018, the award-winning brand Gamut joined the Raidho/Scansonic family, a move in which Gamut’s Benno Baun Meldgaard was appointed chief designer, with a brief to work collaboratively across all three companies. In the twelve months since the move, Meldgaard has been bringing his considerable vision and expertise into a number of key product ranges.

One such range is Scansonic HD’s MB series of loudspeakers, now renamed MB-B (‘MB’ is for Michael Børresen and ‘B’ is for Benno). The new MB-B editions have been upgraded and optimized in almost all areas.

The top-end, however, still features the famous Raidho ultra-light ribbon planar tweeter, in which the membrane is formed by a Kapton-aluminum sandwich just 20 microns thick. Its extremely low mass – approximately 50 times less than any conventional textile, ceramic, beryllium or diamond dome – translates directly into higher resolution and less material coloration.

The midrange drivers and woofer have now been fitted with a new low loss spider which greatly improves the dynamic capabilities as well as expanding the frequency response in the bass region. A very nice side effect of this is that the break-in period has been reduced greatly (around 100 hours).

The crossovers have been completely redesigned, resulting in a much more even and natural sound. All drive units are time-aligned at listening distance, delivering a series of speakers which presents a big and precise soundstage, and boasts a superb timing that will surely make your foot tap and put a large smile on your face.

The previous acoustically vented cabinets have now been replaced with a ported cabinet which is tuned for optimal impulse response, giving a more coherent, dynamic and detailed low-end reproduction, while at the same time making in-room placement of the speaker much easier and more versatile. The cabinets’ internal construction has also been changed in order to optimize airflow which, combined with minimal use of damping-material, further enhances the above-mentioned coherence, dynamics and detail of the low frequencies.

In the new MB-B series, Scansonic has transformed a very good range of loudspeakers into an exceptional one. A new level of life, energy, transparency and natural coherence are packaged in a very elegant, room-friendly design, and at a price that belies the performance on offer. 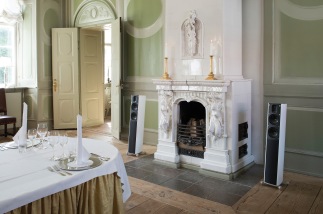